Lin Wei is an evolved human and current ally of Zuo Tian Cheng. She was also the leader of the Black Bandana Society before its destruction.

Lin Wei is a young and beautiful women with a slender and well defined figure and lilac eyes and hair.

In her first apparition at the end of the Blood Quest Arc she wore an attire consistent in blue jeans with a black belt, a light brown jacket and two black bandannas covering her face and head.

During most of the Fall of the Dragons arc his vestment is sightly different, having removing her jacket to reveal a black backless crop top, with a translucent fabric from the cleavage to the black neck. She also removes her bandannas revealing her face.

Since the start of Long Hua Ruler's Arc she change to a new outfit, consistent of an open yellow mini jacket with short sleeves, a black bikini top and yellow short shorts.

After getting word about the capture of Tian Cheng, she send the two elites of her group in order to analyze the situation and confirm the rumors about the evolution enhancing method.

Fall of the Dragons Arc Edit

Lin Wei was introduced in Chapter 140 where she states that the Black Bandana Society was no more and was destroyed.As she is talking , she asks Zuo Tian Cheng to speak privately where she takes off her mask and jacket to reveal a black backless crop top, with a translucent fabric from the cleavage to the black neck. She makes a deal with Zuo Tian Cheng that if he helps her get the revenge she will let him do anything he wants to her (blushes stating she likes him). Zuo Tian Cheng agrees to let her stay and asks her to promise to make a weapon for him(to which she agrees) as he remembers the past. Later in the arc she is surprised by Tian Cheng's powers and finds him interesting.She has feelings for him also considers him as a great friend.

Lin Wei uses her ability of metal control to forge a weapon commissioned by Tian Cheng. During the fight against the colossus zombie, Lin Wei quickly delivers her work, a giant sword, to Tian Cheng just in time for him to kill it for good.She helps the Azure Mountain Gang control the zombie herd to keep them aways from the colossus zombie.

After defeating Hu Feng , she gives out special throwing knives set(forged with meteorite crystal) to Luo Brat and Gao Fei. She also specifically asks Zuo Tian Cheng to take care of his sword and name it (named Meteor, also the best weapon made by her so far) that she made only for him before the group sets out to find Xuan Xuan. Before leaving she shouts at him again to take care of his sword proving she likes him.

Fall of the Dragons Arc I 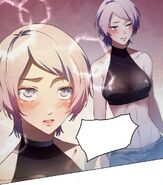 Fall of the Dragons Arc II 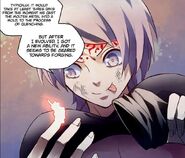 Retrieved from "https://moshi-fanren-the-last-human.fandom.com/wiki/Lin_Wei?oldid=5562"
Community content is available under CC-BY-SA unless otherwise noted.